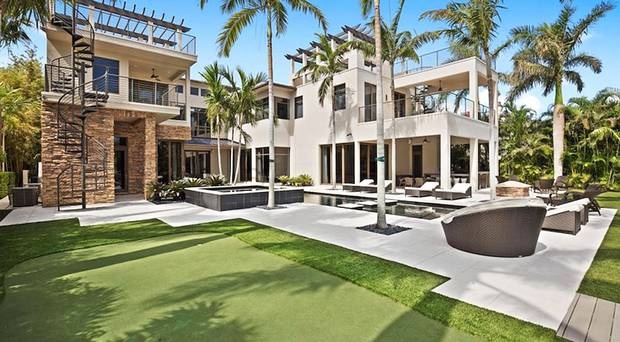 Built in 2010, the sun-soaked deluxe pad boasts six bedrooms, a fully-equipped gym, nine bathrooms, a swimming pool and a private jetty that serves a nearby lake.

The 10,500sq ft home has been tastefully decorated in greys and beige, with a pool table in one of the leisure rooms.

There's even a putting green in the grounds where the Holywood-born golfer could take out the clubs and get in a little after-hours practice if the mood took him.

Rory and his American wife Erica Stoll - who hails from the same area of Palm Beach where the house was sold - have now moved into a new home once owned by golf legend Ernie Els in nearby Jupiter.

The couple first met when the stunning New Yorker was working manager of championship volunteer operations for the Professional Golf Association of America.

She famously woke McIlroy up after he had slept in during the Ryder Cup in 2012.

The new owner of the former McIlroy mansion, which the golfer originally paid £7.2m for, has not been revealed.

In 2013, McIlroy sold a five-bedroom house with its own golf driving range and putting green at Moneyreagh, Co Down, for £2m. The 14-acre estate also boasted five bedrooms and a gymnasium.

In 2014 the golfer bought a property in Holywood. He also snapped up a three-storey building there, described as having been sub-divided into five apartments.

THINKING OF MOVING? WE CAN FIND YOU THE PERFECT HOME.